So, you're thinking of moving to Suffolk... 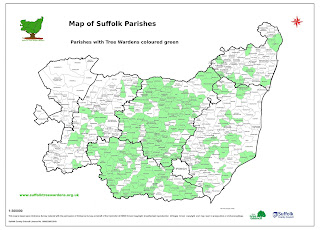 It seems, from today's East Anglian Daily Times, that many of you are. That is, if you currently live in London. Now, having made the journey myself a decade or so ago, I can entirely understand it - some charming countryside, decent beer, good food and, above all, house prices that allow you to sell your house in the suburbs, replace it with something with a bit of character and bank a large chunk of cash to spend on having a good time.
It was not long after I moved up here that the Evening Standard ran one of those regular features, you know the type, "Why not live in...", suggesting that Needham Market was the sort of place where you could commute into London. Given that Needham Market last had a direct train service to Liverpool Street in heaven knows when, the connection at Ipswich could be a bit dicey and an annual season was of the scale of "How much? You are kidding, right?". You wouldn't, and even now very few do.
Now, a season ticket from Stowmarket comes in at over £8,000, and your job really does have to be a good one to justify that, and the three hours plus you'll spend each day commuting. But, if you can get the salary and not commute...
And that's what's happening. Heavens, even my usually cautious employers in central government are suggesting that I may never need to work more than three days a week in a big glass and steel box. I suspect that, if I can demonstrate that I'm as effective at home as I am in an office, I may not even need to do that.
So, we're seeing a steady flow of people who have seen the possibility of escape from the endless London suburbs and realise that, for the price of building a small garden room to use as an office, they can get a nice home, a chunk of money and a bit of extra time to spend on family, friends or just kicking back. And Suffolk is close enough so that, if you do have to go into London occasionally, it doesn't feel like so much of a burden. The seaside isn't far, there's plenty of open countryside. What isn't there to like? We even have opera.
Taking my example, not commuting into Ipswich gives me back about seven hours a week and about £2,000 in travel costs. Not commuting into London would be about seventeen hours a week and £9,000.
And, to give you an idea of the property options that Needham Market has to offer, here's something on the High Street. £475,000, Grade II listed, four bedrooms, it even has a Needham Market Society blue plaque. There's a decent pub across the street, the station is two minutes away, and buses to Ipswich stop almost outside the front door (the bus stop has a stone plaque to mark the Diamond Jubilee... of Queen Victoria).
Don't all rush...
Posted by Mark Valladares at 10:58 pm

Email ThisBlogThis!Share to TwitterShare to FacebookShare to Pinterest
Labels: Suffolk