It has, somewhat astonishingly, been two years since I became Suffolk's representative on the National Assembly of the National Association of Local Councils (NALC) under somewhat unusual, albeit worryingly typical for me, circumstances. And, as nobody seems to mind that I continue, I'm still in post.
In that capacity, I attended NALC's Annual General Meeting on Tuesday, expecting a not terribly exciting meeting but keen to do my bit for the organisation. I say "not terribly exciting" as it's an off year for elections to the Executive Board and the various committees, and the only items likely to be debated were a motion from our Northamptonshire colleagues on Clerks and some constitutional amendments.
The Northamptonshire motion, one which had the support of the Suffolk delegation, noted issues in terms of recruitment and retention of Clerks and called for a benchmarking exercise to establish a clearer sense of requirements.
I spoke in favour, noting the difficulties for small parishes, where the position of Parish Clerk perhaps required four hours per week, meaning that you couldn't really make a career of it, and making recruitment challenging, to say the least. Having had to act as Clerk for nine months myself, I noted my rather greater appreciation of the knowledge and skills required.
There was some opposition, from those who didn't see how a benchmarking exercise would work, or were opposed to the engagement of a consultant, but the motion was eventually passed.
Most of the constitutional amendments were lost, as the proper notice hadn't been given, which was slightly awkward, but as none of them were felt to be urgent, it probably didn't matter much, even if the Task and Finish group who had been given responsibility for producing them might have wondered why they were encouraged to get the job done in the first place.
That left a proposal to change the way NALC runs its elections, introducing the Alternative Vote system for single vacancy contests and the Single Transferable Vote system for multiple vacancy contests. It was unfortunate that the mover of the motion was semi-inaudible for reasons that never entirely became clear and that the seconder found it impossible not to over-complicate matters, thus stirring up confusion and thus opposition.
I did try to offer a very brief explanation of the benefits, rather than explaining the mechanics, but it was clear that the mood of the meeting wasn't favourable enough and, whilst each of the elements of the proposal won a majority, it wasn't enough to reach the two-thirds majority required. That probably means that we won't be revisiting it for a while, which is a pity.
A meeting that was gently steered, rather than strictly managed, by our Chair, Keith Stevens, ran pretty much to schedule and I do see improvements in the way that NALC is run along the lines of better reporting and transparency, but we still have a bit of a problem with wider engagement across the sector. That's partly the nature of the beast, I think - after all, how many Parish councillors have much interest in events beyond their borders?
But I am enjoying the role and, if my colleagues in Suffolk are minded to let me continue, I'd be happy to carry on. We'll find out the answer to that question next month...
Posted by Mark Valladares at 11:14 am No comments:

Email ThisBlogThis!Share to TwitterShare to FacebookShare to Pinterest
Labels: NALC 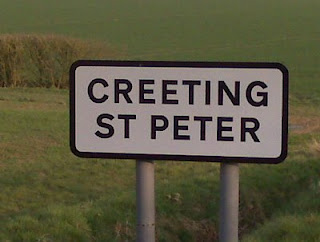 I had thought that, having served four years as Chair of my Parish Council, I had deserved to enjoy a slightly slower pace of life as Vice Chair, and Finance portfolio holder. I'd even managed to resolve our lack of a Parish Clerk with what seems like a rather innovative solution. Unfortunately, for reasons too complex to explain, the Chair became vacant within ten weeks. After a discussion with my remaining colleagues, it became clear that the only solution was to return as Chair.
And so, on Monday night, Council met to pick up where we'd left off in July, with the first order of business to co-opt a new member. We had two vacancies, and still hope to fill the second next month, but having four councillors when your figure for quoracy is three can only be a good thing, especially as our newcomer looks likely to be active and capable.
My colleagues then graciously elected me as Chair, and so life returns to normal in our small, but perfectly formed, village.
That said, I'm probably better equipped than I was the first time. The experience of having to act as Chair, acting Clerk and Responsible Finance Officer has given me an insight into the mechanics of local government that I might not otherwise have gleaned. You can, as it turns out, rely too heavily on your Clerk, to the extent that you don't really have a grasp of how things actually work in reality. I would admit to having fallen foul of that but, if you've got a Clerk you can rely upon, the temptation is simply to let them get on with it.
And, right up to the point where the relationship is severed for whatever reason, that isn't a problem. And then it is. I was lucky, in that the relationship with our ex-Clerk was still good, and she was willing to tolerate acting as a "postbox" whilst we sorted out a replacement. I don't think that either of us thought that it would take nearly a year...
But, as noted before, we have now appointed both a Clerk and a Responsible Finance Officer, and I intend to work closely with them going forward, so that I understand what is happening and why, and can fulfil my obligations more effectively.
And so, my reign of terror leadership resumes. Watch this space...
Posted by Mark Valladares at 10:43 am No comments: