The big train ride, day 9 - on a very comfortable wing and a prayer

Tarragona has two stations, one in the city, served by regional trains from Barcelona, the other a twenty-five minute bus ride away from the city’s bus station, thankfully conveniently located for my hotel, which is served by high speed trains between Barcelona and Madrid (amongst other places).

Camp Tarragona was purpose built, and is a sleek glass and concrete building with all of the things that you really need from a station and not much else. It also has luggage scannners, which was somewhat unexpected - the Spanish are particularly keen on security and, for the time being at least, mask wearing. 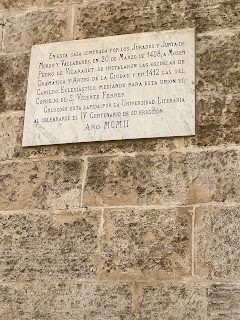 I was bound for Valencia, which turned out to be rather glorious. The sun was shining out of a perfectly blue sky, it was warm and still pleasant, and the core of the city is utterly charming and, as I had a couple of hours to soak it all in, I took the opportunity to wander around, taking in the sights. These include a plaque with my surname on it, somewhat to my surprise.

Bridges, gate towers, a sensational looking market hall, Valencia has all this and more, plus direct flights from London, and I deeply suspect that I will bring Ros here at some point in the not too distant future.

All good things come to an end, apparently, and I had to leave, albeit not actually by train. Valencia has a convenient airport and, having realised that I wasn’t going to able to leave Spain by train, I had a flight to catch, bound for Zürich with an onward connection to Vienna, courtesy of Swiss. In keeping with the first class train ticket, I was flying business class, using some residual United Airlines frequent flyer miles.

Valencia Airport is nice enough, with a very civilised business class lounge, and Swiss supply passengers with some very nice chocolate - something I like even more than gummy bears.

I made my rather tight connection in Zürich, arrived safely in Vienna, and headed into the darkness. It was time to return to Bratislava…

Posted by Mark Valladares at 10:05 pm No comments: