Day 3 - Skopje to Tbilisi, via the world’s meeting point...

Skopje Airport, and not Skopje Alexander the Great Airport, is the equivalent of, say, Leeds Bradford Airport, but without the glamour. It’s functional, no more, no less, but it has the advantage of not being a place you can easily get lost.

The flight to Istanbul was short and uneventful, although Turkish Airlines managed to serve a cooked breakfast which was better than just about anything British Airways have ever served me, and they do this for a flight of just over an hour and a half.

My connection in the new Istanbul Airport was rather less than that, but I bypassed the short connection route and headed into the heart of the airport. And my, is it something, a vast shopping and eating opportunity with convenient parking for aircraft and connections to just about everywhere. Mogadishu? Check. Ulaan Bataar? Certainly, via Almaty. And, unlike Heathrow, it didn’t seem to be particularly stressed, as everyone seemed pretty relaxed. It’s an airport that seems to work, and if there is a flaw, it’s that there aren’t many convenient hotel rooms available.

As an comparison with the fiasco that is Berlin’s new airport, it just shows how ambitious Turkey is, even whilst its government edges ever closer towards authoritarianism.

I made the next flight easily, in fact, so easily that I went for another walk - those steps don’t do themselves, you know.

The Tbilisi flight is another two and a half hours eastwards, and the Turkish meatballs with a vegetable casserole were most welcome. And, unlike most European airlines, business class on Turkish Airlines comes with wider seats, rather more legroom and a fair bit of recline.

Tbilisi. Capital of Georgia. Home to some of the world’s most rapacious taxi drivers. My advice is, do your research first so, when they somehow forget to start the meter, the 90 Lari fare they ask for can be negotiated down to something more like the 30 Lari it should be. It’s a pity, as Georgians seem like a friendly enough bunch, but their Tourism Ministry need to do something about that.

My hotel was within a reasonable walk of the main station so, having settled in, I set off to explore and buy my train ticket for the next day. I found the station, even found the ticket office and managed to find out that they don’t sell tickets in advance on the route I would be taking.

I would have an early start the next morning...
Posted by Mark Valladares at 9:01 am No comments:

North Macedonia is country number 65, and whilst for some of my FIRC colleagues, I am a mere amateur, my goal of visiting more countries than I have birthdays is well on target. But why Skopje, and why for just thirty-three hours?

Well, it comes down to those frequent flyer miles and the best means of using them. The best connection for my next destination is through Istanbul, but I didn’t want the hassle of a Turkish visa, thus somewhere with an early, but not too early, flight to Istanbul allowing the connection to be made.

My hotel was on Macedonia Square, close to the enormous statue of Alexander the Great. And it is very big. The idea of the government was to build big statues to celebrate the historic past of a country which, strictly, doesn’t have that much. 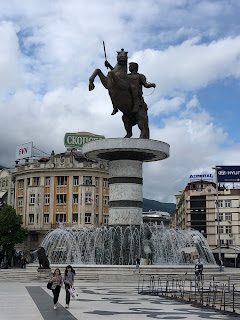 And there is a lot of statuary. Now, given that the country could do with some infrastructure, I would probably have used the money differently, but then I’m not trying to create a sense of nationhood.

I didn’t really have any plans, but did what I usually do, i.e. go and find the railway station and have a look around. Take my advice. Don’t bother. Skopje’s railway station is undoubtedly the most depressing place I have ever been, dark, gloomy, neglected. There are trains, albeit not that many, but you wouldn’t want to turn up too early, or during the hours of darkness.

The old railway station is now the Museum of the City of Skopje, with the clock stopped at the moment the 1963 earthquake struck the city. And that’s why they built a new one. Socialist brutalism is a thing, but not one to cherish.

The city lies between two ranges of hills, and the River Vardar runs through its heart on its way to the Aegean Sea. Its primary role in Skopje is to provide an excuse to build new-classical buildings along its banks, but it’s grey and not terribly inviting.

In the afternoon, I went for another walk, this time heading northwest along the river, past the home ground of FK Vardar, apparently the most renowned football team in North Macedonia. No, I hadn’t heard of them either, perhaps because they’ve never met an English opponent in the twenty seasons they’ve taken part in European club competitions. It’s a big stadium though, and the national team play here.

My goal was the Skopje City Mall, and to get there, my route took me through the City Park, which is rather peaceful and, whilst it isn’t terribly nurtured, it’s a nice place to walk.

The shopping mall is where the young of Skopje go to hang out and, whilst by our standards, it’s not that special, there’s a decent range of shops, some of which are vaguely familiar, including an outpost of Lush. But there wasn’t enough to persuade me to hang around, so I headed back to the hotel and an early night.

For I had a plane to catch in the morning...
Posted by Mark Valladares at 8:34 pm No comments:

Day 1 - London to Skopje, taking the scenic route to the spa...

So, here I am, sitting on a balcony overlooking a small spa town in the South Caucasus. And the water is slightly, but noticeably salty, best drunk warm. You may wonder what I’m doing here and, to some extent, I’m wondering too. But it’s been fun, and a little bit erratically journeyed.

Perhaps I ought to go back to the beginning...

When I arranged this trip, it was on the basis that Ros would be busy travelling somewhere else and, as is our habit, when Ros goes somewhere, I go somewhere that Ros might not be that interested in, or with an itinerary that wouldn’t really suit her. I had thought that this trip possibly fell into both categories, but certainly the latter.

That might be explained by the first leg of the journey, on Sunday morning, which took me to Skopje, the capital of North Macedonia, via Warsaw and Vienna, with a journey time of just over fifteen hours. There is a catch to using frequent flyer miles for your journey, and in this case, it meant either some fearsomely early starts (which I’m not good at), or arrival times in the middle of the night (which aren’t high on my preference list either).

Using the Lufthansa lounge at Heathrow’s Terminal 2 is strongly recommended - they have jelly beans and a typically Germanic breakfast (hearty) - before LOT Polish Airlines safely conveyed me to Warsaw, where I spent a happy(ish) hour walking laps of the airport - I’m doing the Society for Civil Servants walking challenge, and attempting to do 15,000 steps a day. I then found their lounge and ate their free snacks. Their onward flight to Vienna was very civilised too, on time, and with a perfectly decent inflight meal.

Into Vienna, and more airport laps - my, is Vienna Airport big? The Austrian Airlines lounge was surprisingly ordinary though, enlivened only by the sight of Sir Nicholas Soames catching up on his reading before heading home from a NATO Parliamentary Assembly meeting in Bratislava. I didn’t disturb him, although if I had, it would have been to say how much I enjoy his Twitter feed.

Their inflight meal on the short hop to Skopje was pretty good though, with a hot, breaded chicken breast with potato salad as the highlight.

We arrived in Skopje just before midnight, and I had only one goal - to get to my hotel room and crash. I made it without drama...

Posted by Mark Valladares at 9:23 am No comments: