Just a typical Sunday in Bogota...

Sundays in Bogota are surprisingly pleasant. Someone in city government obviously got the crazy idea into their head that allowing people to reclaim the city was a good thing. And so, one of the main arteries in the centre of the city is dedicated to pedestrians and cyclists only. It works, and creates a really pleasant atmosphere for a gentle morning stroll. Clearly the locals agree, as the pavements are crowded with families walking their children and/or dogs or, as in one interesting case, their parrot, which was squawking away, sitting on a small wooden perch.

I took the opportunity to attend Eucharist at the cathedral, which was traditional in tone and style (I'm not the most devoted Catholic but I'm guilty about it...). The cathedral itself is remarkably well kept.

I even managed to get some shopping done, before heading back to the hotel to pack, have some time in the steam room and an hour of massage before my journey to the airport. So now I must leave you, waiting in Sao Paulo for my onward connection to Buenos Aires. Life's a bitch, isn't it?
Posted by Mark Valladares at 6:29 am

I had said that I wasn't impressed with Bogota when I passed through the first time and, I must now confess, I was wrong.

On arrival, I set off for the Zona Rosa in Northern Bogota and discovered a world of nightlife and action. If I were fifteen years younger and forty pounds lighter, I could really have an entertaining existence, assuming of course, that I could rid myself of my persistent introversion!

Yesterday I visited the Museo del Oro, a collection of ancient gold artifacts. It really is amazing what they were able to do 2,000 years ago although some of the headwear would require neck muscles of steel to be worn with any degree of comfort whatsoever.

This evening, I head back to Buenos Aires and sea level. Altitude has been a problem for the past week but it has taught me to maintain my diet and exercise regime. I can't see a downside to that in any event.
Posted by Mark Valladares at 10:29 am

Another perfect day in Quito, although I'm struggling with the altitude.

This evening saw my first look at football Ecuador-style and I have to admit that I wasn't that impressed. Along with 1,511 others, I turned up at Estadio Olimpico Atahualpa to watch Deportivo Quito play bottom of the table Liga de Loja. Obviously, Deportivo decided that they would help the team from Loja by playing to their opponents level but, despite this, took the lead midway through the first half.


Just before half-time, a nasty collision saw both Deportivo's goalkeeper and a central defender prostrate on the floor and unable to start the second half. This clearly encouraged Liga de Loja, who looked quite dangerous and were rewarded with an equaliser. I'm sure that the four away fans were delighted... Despite an increased sense of urgency, the home team got no closer that hitting the woodwork and the game ended 1-1.

I'd thought that the crowds in Peru and Bolivia last year were disappointing but clearly South American fans only come to the big games, and this clearly wasn't one of them...
Posted by Mark Valladares at 10:12 pm

I'm in the middle of the world, Ma!

Just so that you have an idea as to where I am, here's a map of Ecuador. I'm in Quito, in Andean Ecuador.

Today, I went to Mitad del Mundo, the place just north of Quito where measurements were taken that proved that the Ecuator was where it is. To mark the spot, a large monument has been built with a globe on top and, to make matters easier for those without a compass, a handy line has been marked so that you know which side of the Equator you are on at any given moment. I'll post a picture when I get back.
Posted by Mark Valladares at 7:30 pm

Email ThisBlogThis!Share to TwitterShare to FacebookShare to Pinterest
Labels: Ecuador, somewhere far away

In the Avenue of the Volcanoes!

Welcome to Quito, capital city of Ecuador! As you can see from the picture, the city is at the foot of one of the many huge volcanoes which form the primary geographical feature of the area. 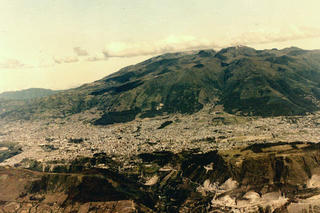 Quito itself is at about 9,000 feet and getting oxygen into your lungs is not that easy. As long as you don't overextend yourself though, it is manageable.

I arrived here from Bogota, having flown from London to Buenos Aires via Washington on Wednesday, then Buenos Aires to Bogota via Sao Paulo on Saturday. The flights weren't too bad but it was good to reach South America.

Buenos Aires was unseasonably warm and sunny, temperatures reaching 32 degrees and I fell in love with the city all over again. The food is wonderful, especially the steaks, and add great wine, good beer and a lifestyle that is not too fast and not too slow, and one could see oneself living there quite happily. Add the football and the fact that if you don't like the government, it seems that you are perfectly within your rights to riot in the streets (not that I would ever do such a thing...), and what more could you ask for? The fact that I don't speak Spanish is a setback, I admit, but I'm sure that, given time, I could do something about that.

I wasn't anywhere near as impressed by Bogota. Perhaps when I go back and am not as tired, I'll see its better side...
Posted by Mark Valladares at 2:18 am

And so what's this to do with getting elected?

The rather charming creature to the right is a llama. The picture comes from my trip to Peru last year and, curiously enough, the setting is Machu Picchu (which is, in best pantomime tradition, behind you). 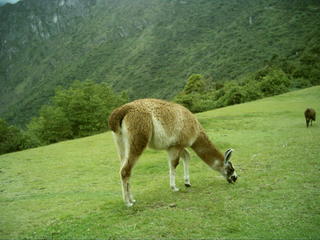 I had to produce a manifesto recently at rather short notice and needed a picture. Problem, I didn't have one of me. So, advertising brat that I am, I used this. Let's be honest, a picture of me won't stop the page from being turned. However, a picture of a llama will confuse the electorate long enough to engage their curiosity. That's the aim at least. Let's see if it works...
Posted by Mark Valladares at 9:40 pm No comments:

Email ThisBlogThis!Share to TwitterShare to FacebookShare to Pinterest
Labels: vote for me

Welcome to my universe...

Apparently, blogging is the new rock 'n roll, or something like that. I'm probably a bit old for that and besides, I was always more into Schubert than anything else.

The idea behind my creating this blog is to provide a way for my family to keep track of what I'm up to, my political colleagues to find out what, if anything, I'm thinking of and for anyone else to find out what a English bureaucrat actually does when he isn't drinking tea.

So, I hope that you enjoy the ride...
Posted by Mark Valladares at 12:45 am No comments: