A freeport for Creeting St Peter - not as unlikely as it sounds...

One of the Government's more interesting ideas is the creation of a number of freeports around the country. According to the consultation document issued last year;

Because freeports still offer that same story of trade and prosperity across the modern world. From the UAE to the USA, China to California, global freeports support jobs, trade and investment. They serve as humming hubs of high-quality manufacturing, titans of trans-shipment and warehouses for wealth-creating goods and services. The UK will recreate the best aspects of international freeports in the brand-new, best-in-class, bespoke model set out in the following pages.

I admit that, when this was first signalled, I didn't pay it an awful lot of attention - after all, why would Creeting St Peter be in the frame? And, besides, it wasn't anywhere near as radical an idea as was being touted - we'd had freeports, and they weren't that fantastic for, if they had been, we'd hardly have gotten rid of them. 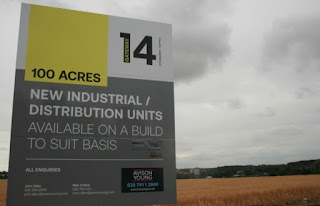 But, suddenly, our business and enterprise park problem is now potentially a freeport problem, as East Suffolk Council announced their support for "Freeport East", based on the ports of Felixstowe and Harwich but with the added element of the Gateway 14 project as the freeport hinterland. This does raise some interesting questions.

Firstly, it does make the project potentially much more viable, as the site can now offer something that local competition can't, which in turn accelerates the likely timetable for development - we had been led to believe until now that it might take 10-15 years for the site to be fully developed.

The park will need to be secure though, as stated in Paragraph 3.11 of the Government's response to their consultation;

Although a few respondents (24%) advocated using technology instead of physical fences, the government considers a physical perimeter to be a robust solution. However, we welcome the inclusion of additional technology as part of the security process and would encourage bidders to set out what they can achieve. Additionally, the government remains open to exploring alternative security measures in the future if they can be demonstrated to be effective and not burdensome for businesses.

which leads to an interesting problem for us in the village, as our only direct access to Stowmarket and the A14 westbound is currently intended to bisect the development. Is that viable, given that it will risk cutting the site into two discrete parts? And, if not, what happens to us, and what will be the impact on traffic levels through the village?

The development may also be far more disruptive to local residents, as it will have a far higher proportion of logistics space, with resultant higher volumes of heavy goods traffic and the likelihood of noise and light pollution around the clock.

To make matters worse, the hybrid planning application for the Gateway 14 development landed just over a week ago, and the formal consultation process closes on 17 February. Can anyone really say if the plans as currently published are suitable for a freeport when the Government hasn't even determined exactly how they will work yet?

I have a bad feeling about this...

Posted by Mark Valladares at 12:10 pm