It’s still snowing in the Creetings... 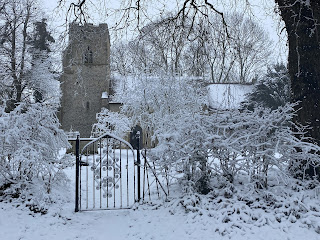 Overnight, the snow kept falling, which did lead one to worry a bit about how easy it might be to drive out in either direction. Early reports that the road to Stowupland was blocked by snowdrifts were, fortunately, replaced by word that one of our local farmers had been out with tractor and JCB. And yes, the road conditions weren’t ideal, but people were getting away with caution.

I had a couple of stray newsletters to deliver, so I took the opportunity offered by a slight lull in the snow to sneak up the farm track towards Roydon Hall Farm, only to be confronted by a courier in a white van, looking to see if the route was passable. Given that he was evidently from somewhere in Eastern Europe, where snow is commonplace, his judgement was that it wasn’t so bad as to be impassable, and he made it easily enough.

As it turned out, he had something for us too, so I’m glad that he did.

This is the second time in recent years that the village has been affected by snow, but luckily, as many of us are working from home this time, the impact has been somewhat less of a nuisance than it might otherwise have been.

But the forecast is a mite ominous, with snow forecast on and off until Thursday, and sub-zero temperatures pretty much continuous until the weekend. There’s plenty of snow on the fields, and the risk of further problems caused as it drifts onto the roads, particularly at Clamp Farm where the properties act as a barrier to further drifting.

It may be necessary to hike across the fields at some point if this keeps up...

Posted by Mark Valladares at 11:30 pm