Are face masks going to part of the new normal?

Like, I suspect, many of my readers, there's always seemed to be something odd about the Far East concept of wearing face masks when out in public during the winter months. We tend to take for granted the idea that we can see people, when they're smiling, or nervous, or disinterested, without a barrier. Perhaps that what makes some people uncomfortable around Muslim women who are masked, although I fear that it's simply an excuse for intolerance.

But I had spotted a report from Australia in late summer that suggested that there was a link between face mask wearing and far lower incidences of colds and influenza in the population. Of course, that might have been a coincidence, but data from the United States suggests that it has contributed to an enormous drop in the incidences of hospitalisation due to respiratory problems this year. And yes, the fact that most of us are staying at home is probably an even bigger factor, but it is food for thought.

I don't envisage governments requiring us to wear face masks after this pandemic is mastered, although if Covid-19 and its mutations become endemic, there might be more thoughts on that point, but I do wonder if the more cautious among us might not consider doing so going forward, at least during the winter months. If vaccination strategy requires an ongoing programme, as influenza does, then perhaps more of us will. 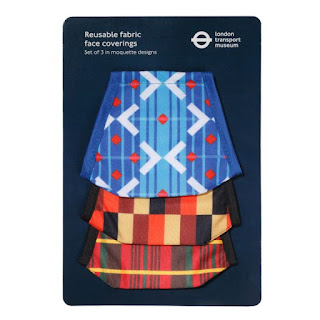 With that partially in mind, and because I needed "something pretty" as a treat, I purchased these from the London Transport Museum shop. The moquettes are, from top to bottom, the New Victoria, the District and the Routemaster, and I have to admit from an initial "test wear", they're pretty comfortable.

I admit to having bought some socks to go with them, and whilst my friends and colleagues won't get to see their true majesty for a while yet, it'll be something to look forward to as and when I see them again.

So, if I am going to want to wear a face mask going forward, at least I'm going to do it with style...

Posted by Mark Valladares at 10:11 am

> lower incidences of colds and influenza in the population
Epidemiologist Dame Anne Johnson remarked on The Life Scientific today that influenza had virtually disappeared from the UK this winter.