Drafting, drafting and more drafting - a Parish Chair and a planning application response... 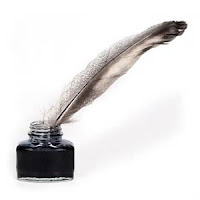 It is, in all probability, the most challenging planning application that Creeting St Peter Parish Council has had to deal with in many a long year, and the stakes are high. A 156 hectare business and logistics park, featuring a range (in both senses of the word) of "megasheds" (as the Gateway 14 Residents Campaign Group refer to them) on the edge of our village is not something that a micro-parish such as ours is really equipped to deal with, given the imbalance of resourcing.
However, we are going to give it our best shot and, as Chair, I feel obliged to lead the effort. What is a Chair otherwise, if not to lead, after all?
But it is daunting, as I've noted previously. How do you balance the fears of the community against what is credible? What evidence is there, and can it be properly interpreted? Can you avoid mission creep, whereby existing problems are conflated with the possible but unevidenced impacts of the new development?
And so, I've spent a week mulling over our response, incorporating the contributions of my fellow councillors where I can, praying in aid the concerns of various statutory consultees - Natural England, Suffolk Highways, the Suffolk Wildlife Trust to name but three - and professional Council staff where their credibility is likely to be higher than ours but where their issues reflect ours.
It isn't easy. You have to create something which is likely to be taken seriously by the various councillors who sit on the Mid Suffolk Planning Committee, makes the points that really matter, but doesn't bury them in surplus verbiage. That isn't always one of my strengths - I tend to write like a slightly cautious Victorian bureaucrat. Given that I am a slightly cautious early twenty-first century bureaucrat, perhaps that shouldn't come as much of a surprise.
The fear is that, in attempting to be reasonable and realistic, you end up failing to sufficiently press the community's case but I have concluded that my only option is to be as true to my beliefs as possible and write a response which is honest, balanced and credible. At least, that's what I think it is.
We'll see soon enough, I guess...
Posted by Mark Valladares at 11:57 pm