When Freeports attack... and why I'm annoyed with Mid Suffolk District Council 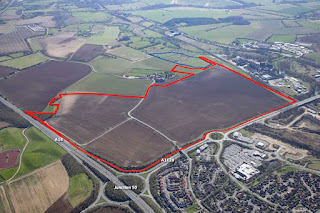 So, what do we now know? A hybrid planning application was submitted for the Gateway 14 project a week or so ago, and the one hundred and fifty plus documents are awaiting our attention, with a current publicised deadline of 17 February for responses. As you might understand, that feels rather daunting.
We now also know that Gateway 14 is intended to form an integral part of the Freeport East bid, centred on Felixstowe and Harwich, which is due to be submitted to the Government by Friday, February 5th (i.e. today). it even comes with a rather snazzy video...
Does the planning application make any reference to this? No, of course it doesn't and, as a result, I've had what I would describe as a challenging conversation with Nic Rumsey from the developers, Jaynic, who appear not to have known anything about this until a week ago. I've had a very good relationship with him so far but he gives the impression of attempting to tapdance on the head of a pin, as he can't honestly give any guarantees about what Freeport status might imply. I don't blame him for that, because how could he?
Have the owners of Gateway 14, effectively the District Council, mentioned this at all? Not to us, they haven't. One must assume that they have been talking to other interested parties about this - East Suffolk Council, Suffolk County Council and the like, and that the bidding team for the Freeport proposal will have at the very least mentioned potential adoption of the Gateway 14 site as the location for a customs site.
And yet, they have allowed the planning application to proceed thus far as though none of that was happening.
I am not impressed.
I have been concerned for some time with regard to the conflict of interest between Mid Suffolk District Council as owner and 100% beneficiary of the profits accruing from Gateway 14, and Mid Suffolk District Council as the planning authority responsible for consideration of the planning application. I am assured that no such conflict applies, and that the planning process is entirely independent. Of course, that is legally true, although many local residents don't believe it for one minute, fairly or unfairly.
From a personal perspective, as a professional bureaucrat myself, I tend to the view that Council officers will do the best that they can. Indeed, given that other developers may wish to make applications for similar projects, setting the wrong precedent makes their lives more difficult going forward.
But, if it is the case that someone at Mid Suffolk District Council is negotiating with the Freeport East team over inclusion of the Gateway 14 site, they might reasonably have an idea as to the potential impact, but are choosing to remain silent. That might be due to commercial confidentiality - the Freeport bids are competitive, after all - but if there is an impact on the site, and adjustments need to be made that affect residents of Creeting St Peter, it would be nice to know now, rather than later, so that we can respond appropriately.
So far, the discussions revolving around the Gateway 14 project have taken place within a promise of openness and transparency, and local residents have engaged in that spirit. And so far, whilst there are elements that are unpopular, there have been useful adjustments and improvements to the original plans which have gone some way towards reassuring us.
It now seems apparent that Mid Suffolk District Council might not be able to be relied upon to uphold their end of that bargain, and my fear is that the sense of mutual respect might be jeopardised as a result. Residents of Creeting St Peter are, I believe, realistic about the likely outcome, but want their concerns to be heard and at least acknowledged, and for credible mitigations to be offered, so far as is practical.
Therefore, my next task will be to seek reassurances about the impact of potential Freeport status on the development in advance of the Parish Council's Extraordinary meeting on Monday week.
It's a very steep learning curve for a small Parish Council and its Chair...
Posted by Mark Valladares at 8:11 am