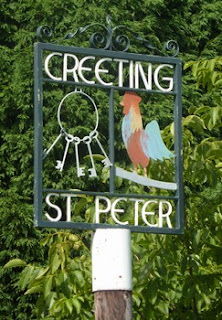 Small Parish Council, not much of a budget, nice bunch of fellow councillors, able Clerk, how difficult could that be, eh? Perhaps they'll write that on my tombstone when I'm gone.
And, indeed, most of the time, it's been pretty straightforward, keeping things ticking along, cleaning the odd road sign, signing the odd cheque. However, the arrival of a series of increasingly complex planning applications has caused me to find out more about local government than I had ever had a desperate urge to know.
Today saw me take part in a virtual meeting with the District Council and the developers, hosted by the Gateway 14 Campaign Group, to discuss the latest developments as part of a four-weekly cycle of discussions. It was my first, as I feel that I should give the Campaign Group the space to explore the wider issues as they choose, including some that don't necessarily impact on my responsibility as the Chair of a statutory consultee.
The big developments have been the submission of the hybrid planning application and the announcement that the site is to be part of the Freeport East bid. It was confirmed that, as far as Mid Suffolk District Council are concerned, there will be no impact on the S.106 funding that the project will generate, which is welcome news.
It does strike me that there is a great deal of uncertainty in terms of the impact of the Freeport bid. We now know that the entire 156 ha site will be included in the tax site which, whilst interesting, doesn't have a huge impact on the current application. However, the question of the customs site is somewhat more complex, and that's important, because it will need "robust perimeter security measures such as fences, controlled access gates and lighting".
We were assured that this area won't be that large, although the bidding prospectus notes that part of the customs site will need to be designated as a temporary storage area, as per the standard United Kingdom customs import rules. Now, given that one of the potential types of occupiers would be businesses assembling products using components produced abroad, there might be more or less space required. That in turn potentially impacts on access, in particular the footpath that has been rerouted through the northern part of the site.
That offers a challenge, because we may need to seek planning conditions that will address the possibility that the footpath might require diverting again, for example.
And that, of course, sums up the challenges of a hybrid planning application - you're attempting to nail a jelly to a wall, as you don't know what the site will eventually look like, because that in turn depends on who turns up as a potential customer and what their needs are. It is all too easy to let your imagination run riot, and to experience mission creep. As a statutory consultee, should I worry about the financial viability of the site, or whether or not it provides value for money? As a council tax payer, I probably should.
But the next stage is an Extraordinary Meeting of the Parish Council to discuss the planning application on Monday. I've got a lot of documents to read before then, and it's not likely to be an easy meeting, even though there is unlikely to be anyone saying that we should just ignore it...
Posted by Mark Valladares at 10:53 pm