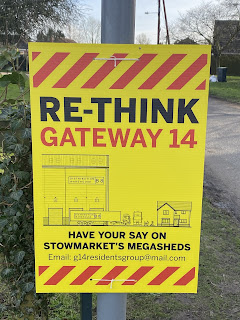 As the Chair of the Parish Council, my brief has been to stick very much to the Gateway 14 planning application itself, attempting to focus on what is in it, how it might best be altered, what is wrong with it, rather than the actual concept.
With that in mind, I encouraged the formation of a separate Campaign Group which could roam more freely without the limits that a Parish Council might feel to stay within, and they have really taken the ball and run with it, with a Twitter account and enthusiastic use of other social media. But it's more than just a mouthpiece, they've worked incredibly hard on taking the entire application apart to see how it might work (or not).
It's not easy, because understanding how the machinery of local government works, finding out who you need to talk to (and actually getting to talk to them) and creating an effective lobbying operation is something that is often left to the professionals. Instead, they have pretty much done it themselves, and been very effective. The signs, like the one shown above, are merely the visual element of their campaign, which has included effective media outreach.
Not only have they drawn up a comprehensive list of issues that will, or may, need to be addressed, but they've taken the question of the entire financial viability of the site and encouraged residents across what I might describe as the 'Greater Stowmarket' to hold their representatives to account.
You see, there is a genuine question as to whether or not this project is now too big to fail. The District Council spent a lot of money to purchase what was agricultural land with existing permission to build a business and logistics park, something in the order of £20 million apparently, and will need to spend almost as much on the infrastructure and mitigation. They do have the advantage of being able to borrow at rates that are rather less than commercial but it really does have to work, and if it doesn't, there's an uncomfortable sense that council tax payers across Mid Suffolk will be on the hook for some time to come.
And yes, they've been a bit unlucky. The site was purchased in 2017, and things have moved on a bit since then. Firstly, 2019 saw the balance of power on the Council shift significantly from huge Conservative majority to knife-edge (sixteen Conservatives and an Independent face twelve Greens and five Liberal Democrats), and then the small matter of a pandemic changed, potentially, everything. What will be needed in a post-Covid world? And will it be needed in Stowmarket?
The Campaign Group have written to every councillor on Mid Suffolk District Council with a series of challenging questions about the financial viability of the project and I admit that, if I was a Councillor, probably relying on the advice of the Council's Officers, I'd be a little nervous about what I was being asked to sign up to. I suspect that very few of the Councillors truly understand the possibilities, and some of them probably feel that they have little choice - there is little prospect of escaping the financial commitment, even if they were opposed to it in 2017.
Ultimately, I'd be surprised if the project was to be abandoned - there's too much at stake for that. But it's entirely possible that the District Council might be a little more wary in future, especially if Conservative councillors start being questioned on the doorstep and in their communities about what seem like eye-watering sums to the small towns and villages that make up Mid Suffolk.
But we'll see what effect they, and we, will have had soon enough. For the time being though, a community waits slightly nervously...
Posted by Mark Valladares at 12:00 am