All aboard the Wrexham & Shropshire! 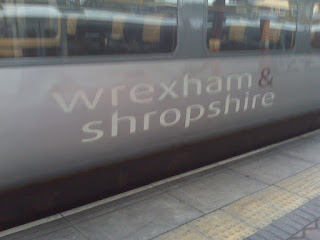 Some months ago, I wrote a slightly tongue in cheek piece about how nice it would be if Deutsche Bahn ran the trains between London and Norwich.

However, it was pointed out to me that they do actually run trains in this country, as Chiltern Railways and the newest addition to the ranks of Train Operating Companies, the Wrexham and Shropshire, are partly owned by them.

The Wrexham and Shropshire, which runs four trains a day in each direction between Wrexham General and Marylebone (except Sundays, when there are three trains), has, according to Passenger Watch, a 98% satisfaction rating. So, when Ros was invited to Ludlow, it seemed like an ideal opportunity to test the newcomer, especially as the Trainline recommended route was via Newport, using First Great Western and Arriva Trains Wales.

So, here I am, ensconced in the First Class carriage of a four carriage train, somewhere north-west of Princes Risborough. My ticket, sent to my BlackBerry, has been checked, the very friendly senior steward has brought me a Diet Coke with ice and lemon, and we are speeding towards Banbury, our first stop.

Lunch, included in my astonishingly reasonable £55 ticket, consists of a game terrine, served with warm toast and a salad garnish, followed by stuffed chicken with spinach, leek and tomato with mini jacket potatoes and carrot bundles. And whilst, alcohol isn't included, the most expensive bottle of wine on the menu, a 2006 Chablis, is just £15.

The windows are clean, so that I can enjoy the view, my seat is perfectly positioned so that it is uninterrupted, there is a power point to charge my BlackBerry and power my laptop, and all in all, it is a splendid way to travel to Wrexham General. Of course, the fact that my final destination is Craven Arms is merely a detail.

Ah well, my main course, and a half bottle of Chablis has arrived so, if you'll excuse me...
Posted by Mark Valladares at 12:49 pm