To mark the return of a delegation from the UK Branch of the Commonwealth Parliamentary Association, I thought that it might be nice to post a few pieces linked to their destination, Bangladesh.

Over the next week, I'll be exploring micro-finance, Bangladeshi politics and the history of the nation, amongst other things... but let's start with a few facts. 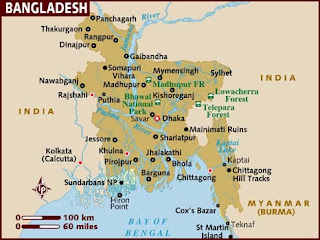 With thanks to Lonely Planet, from whence this map is reproduced, you can get an idea as to the political issues. Almost surrounded by India, the country is criss-crossed by major rivers, and prone to flooding.

Bangladesh declared its independence from Pakistan in 1971, and a short but bloody war ensued, with India siding with the Bangladeshis (indeed, a member of my family saw action as an officer in the Indian Air Force). However, it developed a reputation for poverty and misfortune, with a fast-growing population.

Today, Bangladesh is the seventh most populous nation on Earth, estimated as having 167 million citizens, and is one of the most densely populated countries too. And despite that density, and the fact that 40 million live on less than 50 cents (U.S.) per day, it has an economy that is growing fast, 5% per annum on average since 1990, according to the World Bank.

The population is 87% Sunni Muslim, and 9% Hindu, with a small Shia Muslim minority, a few Buddhists, the odd Roman Catholic or two and a few animists. As for language, the official, and most widely used language is Bengali.

So join me over the coming week, it will be informative, and won't hurt at all...
Posted by Mark Valladares at 10:31 pm

Email ThisBlogThis!Share to TwitterShare to FacebookShare to Pinterest
Labels: Bangladesh

It may be worthwhile doing a post on the election campaign in Bethnal Green and Bow - which has a large Bengali population and where three British Bengali's will be standing for MP. The Lib Dems have a good chance here with the incumbent George Galloway is standing down this election and popular Bengali tv presenter Ajmal Masroor, as their candidate. Local papers are predicting a very close race.