We're not the world's most successful Liberal Democrat Association, evidenced perhaps by our lack of an MP, or our failure to dominate Mid Suffolk District Council. But we do have a really good events organiser, Sheila Norris, and she got as close to centre stage as she is ever likely to want to be on Saturday, as her organisation of our Annual Dinner reached its apogee with the event itself, held at Nowton Court, just outside Bury St Edmunds.

Our guest speaker was the 'Voice of Colchester' himself, Bob Russell, who had come up to do his fourth event of the day - no slacking for him, unlikely some other MPs from other parties some might name - and, as Ros and I were in attendance, we got to sit with him. 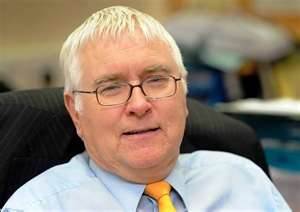 It was a very good meal, and I started with the mushroom soup, followed by salmon and finished off with apple and blackberry crumble with 'proper custard' which was, as promised, proper. Meanwhile, Bob was in raconteur mode, made all the better by discovering that one of our key activists, David Payne, had worked with him on the London Evening News more than forty years ago. There were a few old stories retold, let me tell you.

Bob was introduced by Ros, and unlike most guest speaker introductions, this one had the advantage of being between long time friends and colleagues, which made it all the warmer.

The speech was a typical Bob Russell effort, full of character, sharp barbs at Labour for their failures, and at the Conservative right-wingers, with a series of slightly unlikely, quirky stories from his time as an MP and before. He told, for example, of his effort to fill his councillor nomination papers with famous names - yes, Michael Jackson and Muhammad Ali did sign his papers one year.

He then took questions from the room. We're not terribly keen on working with the Conservatives here in mid-Suffolk - necessary evil and all that - and the comments reflected that somewhat.

All in all, a very nice evening, topped off by a raffle prize for me. Many thanks must go to Sheila for organising another wonderful evening, and I look forward to the next one...

Posted by Mark Valladares at 5:08 pm