English Candidates Committee: my manifesto for 2008

Last year, I claimed that I would be a radical voice for change on English Candidates Committee, and you gave me the chance to prove that it was more than just a slogan.

Since then, I’ve been working to put my ideas into play, not just on the committee itself, but on the newly created Selection Rules Review Group. 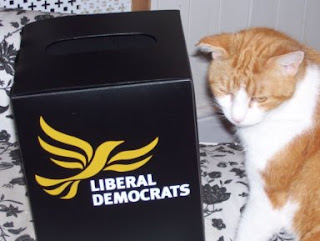 and my cat, Cincinnati, thinks so too…

Local Parties, especially our smaller ones, struggle with the bureaucracy of our candidate selection system. It is expensive and time consuming, so I have proposed that we abolish selection committees for non-target, non-Moving Forward seats. Less need for selection committee training, less work for returning officers, and why place more barriers in the way of applicants who are already approved?

I’ve worked hard to persuade my fellow colleagues, and sense that I’m making some headway. I’ve also supported other proposals such as revised, cheaper arrangements for advertising vacancies for PPC’s.

There is still more that I would like to do. Greater freedom of campaigning in selections is still to be won, but I truly believe that we should encourage greater creativity from our candidates. Technology may be seen as a threat by some, but it also presents opportunities for the brave.

I promise to oppose attempts to introduce positive discrimination in candidate selection. Liberals oppose such things on principle and I am no exception.

Finally, if re-elected, I will continue to propose and debate issues related to the work of the committee on my blog, as a means of reporting back on what I’m doing. I believe that it is vital that I keep you informed of my activities so that you can vote on an informed basis. It’s what democracy should be all about.
Posted by Mark Valladares at 12:57 am

You aint seen me, right? *scarpers*

All of that gets my vote!

That's a manifesto I can happily vote for :D

Well, except for the slight tautology of "fellow collegues"... [/nitpick]