The big train ride, day 8 - in which some valuable lessons are learned…

France was heating up, and I had a long train ride ahead of me. Which, as regular readers may recall, left me with a challenge. You see, I started walking ten thousand steps each day in 2016, and haven’t missed a day since. And so, to ensure that I didn’t fail, I had an early breakfast and took one of Dijon’s very efficient trams into the city centre to take advantage of the best of the day. 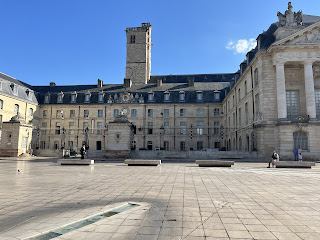 Dijon is a delightfully walkable city, with seemingly something interesting to see around every corner, as perhaps befits the capital of Burgundy, and on a gloriously sunny day, my only regret was that I didn’t have time to stop, enjoy a glass (or two) of wine and a hearty, if stylish, lunch.

And that, I guess, was the flaw in my schedule - albeit an intentional one. But Dijon is certainly somewhere I’d like to bring Ros to sooner rather than later.

But I did have a train to catch, and a connection to make…

France is, of course, famous for its high speed trains. They are undoubtedly impressive, sweeping across the country on dedicated lines but why do SNCF insist on charging for a mandatory seat reservation? And it’s not a minor amount either, with the cost of a first class seat reservation adding as much as €70 to the basic first class fare. And, if you have a connection, that means more than one seat reservation.

As I headed for Dijon Ville station, there was something nagging away at the back of my mind - what I was going to do the next day. For, whilst everything had been neatly planned up until now, the only fixed point after this journey was a Eurostar train in three days time. But the train to Lyon was on time, I had snacks to keep me going and a solution was bound to come up, right?

At Lyon, I had time to ponder my options before catching the train to Barcelona. SNCF and the Spanish national rail company, RENFE, now operate four high speed trains each day crossing the border. Other than that though, your only real options are either via Port-Bou on the Mediterranean coast, or via Latour de Carol in the Pyrenees. Neither is quick, or convenient, and it leads me to wonder why more fast trains don’t exist. I’d been lucky to get a reservation on this leg, which should have been a warning.

There were no seats available the next day travelling back the way I was coming, and no availability on trains to San Sebastián, either directly or via Madrid, and so I was forced to do something unplanned.

The journey to Barcelona is one to enjoy, with some gorgeous scenery as the train passes through Nimes and Montpellier, along the Mediterranean shore and into Catalonia. We were held up at Perpignan due to a passenger being taken ill and, by the time we arrived in Barcelona, it was already dark.

I did have a plan though, requiring a seat reservation on a morning train out of Tarragona, and as RENFE only do seat reservations for Interrail passengers in person, I headed for the ticket office to make the necessary arrangements. This turned out to be easier said than done, and it required some rather frantic negotiations with their customer service team before I was directed back to the ticket office.

Once I’d queued for a little while, a friendly gentleman remarked that “that hombre” had appeared, sold me a seat reservation and indicated his mild surprise that, with such a Hispanic surname, I spoke no Spanish. But I had what I needed. The Great Escape was on!

Posted by Mark Valladares at 8:13 pm