The big train ride, day 5 - in which things go a bit wrong…

It was another glorious day in the Tatras, and I was up relatively early in order to grab breakfast and explore. The sky was full of swallows as, it turned out, they were staying at my hotel too, with nesting sites in the eaves and fledglings to feed.

As part of my package, I was able to get free cablecar rides, so, after breakfast, I headed to the nearby station for the ride up to Hrebienok. 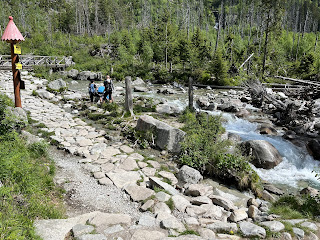 And, having climbed another 250 metres, it seemed a pity not to go for a walk now that I’d got there, so I set off along a rising path into the woods. It was alright at first but, after a while, the path became less a flat surface and more a jumble of rocks. I didn’t really have the right footwear but, well, it seemed a pity to turn round. I picked my way as far as a bridge over a stream where the spray was nicely cooling for a while.

The return journey was rather more treacherous - it’s funny, isn’t it, how descents seem to be like that? - and my skill at picking the right rocks to step onto failed me at an awkward moment. I crashed to the ground, landing hard on both knees and rather taking the wind out of me for a moment. Whilst I was hurt, I wasn’t broken and, getting up a little gingerly, I made it somewhat more slowly back to the proper path and limped back to the cablecar.

Lunch and a beer tends to cure many things, and it was time to set off for a new destination, so there wasn’t time to feel sorry for myself.

I was supposed to return to Poprad-Tatry for my next train but instead I returned to Strbske Pleso for a connecting train to Strba. The train to Strba is a narrow gauge electric cog railway, descending sharply into the valley below, where my reserved train would pick up about fifteen minutes after Poprad-Tatry.

My timing was good, as heavy rain promptly swept over the Tatras from the Polish side, washing out the rest of the afternoon. And I made it to Bratislava in time to do some laundry.

I had booked my hotel in Bratislava based on the premise that it had a guest laundry, thus allowing me to have enough clean clothes to make it through to the end of the trip. The news, on arrival, that no such guest laundry existed, was a bit of a blow to morale. But that was a problem for a new day, and I needed to take the weight off of my aching knees…

Posted by Mark Valladares at 5:41 pm