The big train ride, day 2 - I like gummy bears but, on the whole, I’d rather be in Dresden…

So, the great adventure was under way, and I awoke with a sense of purpose in anticipation of… well, to be honest, I wasn’t really sure. I knew that I had a train to catch at 11.30, and I had plans to find pork and beer at the other end but, apart from that, it was all a bit “free form”. Mannheim was quiet. Shopping on a Monday morning clearly takes second place to work but that’s probably what you’d expect from Germans. They do take pride in public places though and the flower beds surrounding the Wasserturm were stunning in an explosion of colour.

All in all, it was very nice but, whilst I was tempted by the possibility of a tram ride to Heidelberg, I had that train.

The 11.32 ICE train to Berlin Gesundbrunnen was late. This was beginning to become a habit but Deutsche Bahn do have an unusual way of dealing with the possibility of less than entirely gruntled passengers - free gummy bears. Germans are clearly big fans of Goldbaren, as you see them in Lufthansa lounges too. Yes, it’s only a small bag, with perhaps ten gummy bears, but Deutsche Bahn appear to be major purchasers from Haribo. Indeed, we lost so much time that a second round of gummy bears was forthcoming. 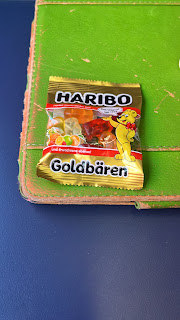 My scheduled connection at Leipzig was doomed, but the 16.00 Regional Express had been held for connecting passengers. Unfortunately, it seemed as though a large percentage of the population of Leipzig were trying to catch it too and it was impossible to get on board. Muttering under my breath that even Greater Anglia are better than this, I stomped off to find the DB Lounge. The Interrail ticket rather confused the stern looking woman at the desk but she  eventually let me in to raid their supply of gummy bears and drink their free Diet Coke.

The 17.00 wasn’t anywhere near as full, despite the cancellation of the 16.31 ICE train, and we rolled across Saxony in a leisurely manner until we reached my destination, Dresden. 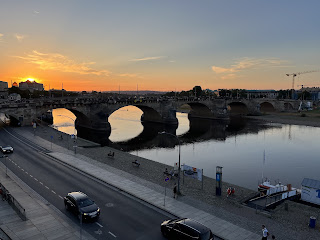 I like Dresden. I first came here with Ros seven years ago for a European Liberal event, somewhat unwillingly, I confess. I was wrong, as Dresden is much nicer than its press. You can walk around the Altmarkt and along the banks of the Elbe, eat pork and drink beer and generally forget the notion of rundown heavy industry and general decay. And considering just how much damage was done to the city at the end of World War 2, the reconstruction of the historic quarter is little short of astonishing. I’m particularly fond of Brühl’s Terrace, nicknamed “The Balcony of Europe”, where you can stroll, stop for a coffee or dinner and enjoy the view of the Augustus Bridge.

And, as intended, pork was eaten and beer drunk, before I turned it for the night. I had an earlier start the next day…

Posted by Mark Valladares at 12:46 pm