The big train ride, day 7 - across the continent to the home of condiment

The idea of sleeper trains is a romantic one and it is easy to forget that, not so long ago, they were headed the way of the dinosaur. Deutsche Bahn were so convinced of this that they decided to axe all of their sleeper trains. Fortunately, their Austrian neighbours saw an opportunity and bought all of the available rolling stock.

The result was a network of routes based from Vienna that allow you to go to sleep in one city and wake up, hours later, a long way away and for no more than the cost of a cheap hotel room. Even if you want a compartment to yourself, and I’m quite keen on that, the cost is still reasonable.

And other people want to get in on the act, with private companies raising funds to fill the gaps that ÖBB (Austrian State Railways) can’t easily service.

My destination was Milan Porta Garibaldi, thirteen or so hours from Vienna, including a two hour break in Villach where the two halves of the train, the other for Rome, were divided and new locomotives connected.

We arrived at three minutes early, leaving me enough time to get to the imposing Milano Centrale to catch a cross-border train to Bellinzona. These are operated by a collaboration between the Swiss canton of Ticino and Italian Lombardy, thus the trains are efficient and rather stylish.

At Bellinzona, the time efficient route to Zürich is via the Gotthard Base Tunnel. Efficient but dull, so I took the slow train, via Airolo and the old Gotthard Pass route and stared out of the window at the glorious Alpine scenery. A dash for a connecting ICE train at Zürich and I was in Basel ahead of schedule to catch an SNCF regional service to Mulhouse Ville. 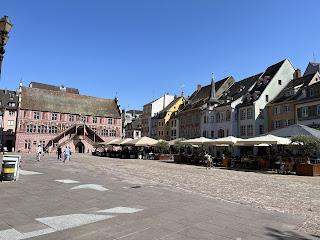 I’d never been to Mulhouse before but rather liked it, a walkable town with a complicated heritage as part of Alsace Lorraine. It’s somewhere I might come back to, with Ros this time, as it’s a region that neither of us knows particularly well. One of the aims of this trip was to visit cities less publicised and I think that it has worked well in that sense.

My final destination for the day was Dijon (cue a series of mustard jokes). My hotel was attached to the Toison D’Or shopping mall, which gave me the opportunity to buy that new Fitbit I needed. It’s very nice and a bit more stylish and advanced than the old one.

A quick dinner later, it was time for some sleep - I had another early start to come…

Posted by Mark Valladares at 4:12 pm