No, not a filigree Siberian hamster... an unexpected visitor to our garden

As a long term city dweller, I was always aware of the theory that you're always within so many feet of a rat (don't ask me how many, my memory isn't that good). However, you didn't see them very often, and you assumed that they weren't a problem as long as they stayed outside. 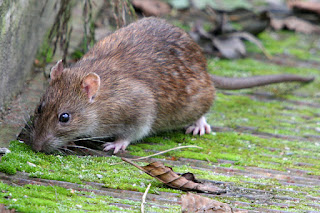 In the countryside, where there's plenty of wholesome grain to eat, I did rather expect to see a few more. But, until now, I hadn't, so when our neighbour reported having seen a rat, I was rather more alert. Rat droppings on our woodpile were concrete evidence that we did have a rat problem, but apart from a dead baby rat, I hadn't actually seen one until today.

It was Ros who brought it to my attention. There is a small tree in our back garden, from which a bird feeder has been hung, filled with peanuts. And there, holding it, was a rat, which had climbed the tree, more a bush really, and was evidently attempting to get some free food. After it had gone, we decided to move the bird feeder to a less accessible spot, as you really don't want to attract rats if you can help it.

An hour later, Ros called me back. Another rat, slightly smaller, had climbed the tree, and was clearly perplexed to find that the bird feeder had gone. It explored the tree a bit, showing remarkable dexterity, before leaving.

Rats have a very bad image, although here in the country, you're more likely to see rather better looking ones, as pictured above, than the rather disgusting image of rats that you adopt in a city. Unfortunately, this isn't going to help them in this instance, as I really don't want to share my garden with any rodent larger than a field mouse. So, it's rat poison in their future, I'm afraid...
Posted by Mark Valladares at 9:17 am

He is adorable. I must day.