Painkillers and anti-inflammatories - a reminder of a moment of carelessness 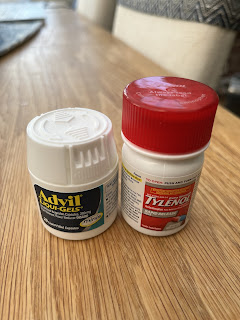 I’ve been in some discomfort, and occasionally pain, for a few weeks now. I’d not been in Maine for very long when the weather took a turn for the worse, with heavy snow making walking difficult.

The converted barn we had rented was lovely, but the driveway had become somewhat icy and, having returned from an expedition into Portland, I was heading for the front door when I suddenly found myself moving dramatically in an unintended direction, landing rather heavily on my right shoulder.

I lay there on my back, turtle like, for a moment or two, cursing the fates, before realisation set in that, whilst I was in some pain, I was going to have to get up and get on. That proved to be somewhat difficult, what with the ice, but I did manage it and, after a restorative lie down and a cup of tea, I felt sufficiently able to carry on. And so I did.

The problem is that, whilst I’m mostly functional, my upper right arm and shoulder clearly aren’t right. Mere bruising should have resolved itself after four weeks, but the pain isn’t consistent in nature. And so, having been persuaded by Ros, I have booked an appointment with a local physiotherapist to see if there’s anything that needs to be done.

I’m not great with pain - partly because I haven’t experienced very much. And I don’t enjoy the unexpected feeling of vague vulnerability, in that I’m a little more cautious in my movements, which is something I’m not used to having to think about either. It is, I suspect, a precursor of old age, albeit a distant one.

Luckily, whilst the discomfort is sporadic, I am able to function without much, if any, limitation, other than the pre-existing ones - and those are all about competence, or enthusiasm, or focus, rather than physical capability. And pharmaceuticals help, even if I try to take as few of them as I can.

And so, tomorrow will be a new experience, in that I don’t really know what’s wrong with me, but I’m hoping that a professional can explain it to me and do something to help. It should be interesting…

Posted by Mark Valladares at 10:08 pm

You fell ,it hurts your pride,you feel stupid.Old age coming along (I am in my 70s).Plus change of climate does not help.HOWEVER when you come home you will be back to your cheery self with your comments on LDV .Best wishes Nigel