Creeting St Peter - goodbye, Alice, and thanks for everything... 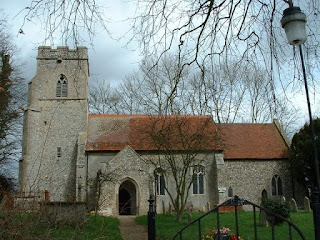 Small villages like Creeting St Peter tend to rely heavily on a small number of people who are willing to take on key, often unsung roles. That's especially true if the population is younger and thus busier with work, children and all of the other aspects of modern life that reduce the time available to do other things.
In our case, there are two organisations which tend to dominate civic life - the Parish Council and the Parochial Church Council. For the latter, there is the perpetual struggle to maintain the fabric of a historic building, i.e. the church itself. If your church serves a population of 275, many of whom are not particularly religious, that struggle becomes more acute.
Accordingly, the Parochial Church Council fundraises, and part of that fundraising is through village coffee mornings and pub nights, which are the backbone, indeed almost the totality, of the village's social activity. And residents turn up in sizeable numbers, buying cups of tea, homemade baked goods, catching up with each other and discussing the burning issues of the day.
Someone has to organise that though, chivvying people along, creating rotas, being "bossy". And, for some years now, that "someone" has been Alice. Alice describes herself as bossy but, in her role as Church Warden, she has worked incredibly hard to keep the show on the road. Unfortunately, that is about to come to an end, as she, her husband Mark and her family are moving away... a long way away.
And so we gathered in the churchyard yesterday evening to pay tribute to her. Jenny, the Treasurer of the Parochial Church Council, made a lovely speech to mark her contribution to the Church, the village and its residents, and our Vicar, Philip, offered a few remarks to remind us of her efforts.
It was a good crowd too, despite the rather dank, gloomy weather that had replaced the warm sunshine of previous days, which rather demonstrated how much we appreciate, and will miss, Alice.
As Chair of the Parish Council, I've been lucky enough to have a good relationship with Alice - indeed, I can't really see how I could have a bad one with her. She works hard, is incredibly effective and gives of herself freely. Every village should have an Alice, and I suspect that there are many that do.
Hillary Clinton wrote that "it takes a village". That's probably true, but villages need an Alice too, because without leadership, nothing that gets done is ever quite as effective as it might be.
So, thank you, Alice, and the best of luck in your new life. It won't be quite the same without you..
Posted by Mark Valladares at 3:51 pm