Alright, so we're underway here in Palermo, in a room lit in blue lights a bit like a 1980's disco (if I find the glitterball, I'll let you know).

After a fiercely early start, the 32nd Congress of ELDR (European Liberal Democrats) is deep in discussion about the future of the European economy, with a rather technical presentation on global interconnectedness. Interestingly, the United Kingdom ranks 6th of the one hundred and twenty-five nations considered, although we rank behind Ireland. Even more interestingly, thirteen of the top twenty are in the European Union, and fifteen are in the European Economic Area.

The Indo-American professor, Pankaj Ghemawat, based in Barcelona, talked persuasively about the importance of migration into the EU to address the demographic timebomb that threatens the welfare system that has developed since World War II. He also noted some of the issues that inhibit intra-EU trade, relative to that within the United States. 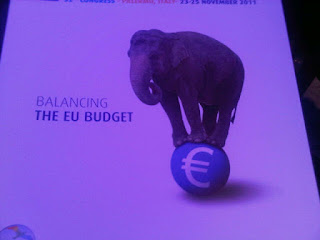 The issues of transport, which is significantly more expensive within Europe (twelve times as much in the case of rail) are perhaps well known. However, the question of trust was not something I had previously considered, and the 'news' that levels of trust in those beyond our national borders are very low perhaps explains why companies do not pursue opportunities elsewhere.

But I ought to share the Congress logo with you. Often, these are esoteric in the extreme, but this one is worth a thousand words...
Posted by Mark Valladares at 10:52 am