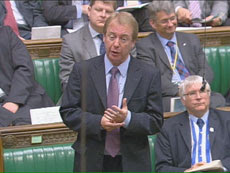 A good friend of 'Liberal Bureaucracy', John Barrett, the Liberal Democrat MP for Edinburgh West, has announced that he will be standing down at the next election, after nine years of dedicated service to his electors.

Here, in his own words, he explains the background to his decision. I have to admit to a touch of regret at the news, as he's one of the nicest guys I know, and a bloody good MP too. However, he's made a decision that is good for him, good for his family, and perhaps he reminds us that MPs are human too.
Party President, Ros Scott, said, "I'm very sorry to learn of John's decision to stand down as the MP for Edinburgh West. His majority of 13,600 is a testament not only to his superb campaigning skills, but also to his dedication to the role of constituency MP. Personally and professionally, John embodies the notion of public service, and will be missed in the Commons and by his many friends in Westminster generally.".
Posted by Mark Valladares at 1:48 pm