Another day on the doorstep 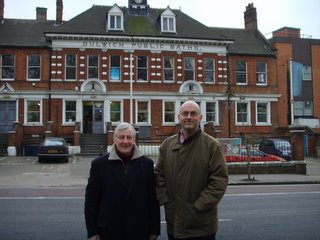 So, having survived my first day of canvassing in far too many years, and invigorated by our glorious win in Dunfermline and West Fife, I spent another session out on the stump.

I have to admit that it was more fun this time, and my canvassing technique is getting better (slowly). Get their preference and get on, don't argue, don't get into a debate. I even persuaded someone to take a poster!

So, who are the two gentlemen in the picture? On the left, Jonathan Mitchell, on the right, James Barber. Jonathan was our Parliamentary candidate last May, achieving a glorious second place with more than 24% of the vote (and I was his agent!). They are the people I canvass with, as they are two of the three members of our Focus Team. The third is Richard Thomas, strategist, Focus designer, and a sitting councillor (plus, most importantly of all, Southwark's Executive Member for the Environment).

If the efforts of Belinda, our ward organiser, myself as Local Party Chair, and the cast of characters who have delivered, canvassed and encouraged are a success, our eventual candidates will get elected and I can bask in the warm glow of voting for the first winning candidates at any level other than Regional List. And believe me, will I bask...
Posted by Mark Valladares at 1:41 am