The Boundary Commission for England reports... can I see three constituencies from my house? 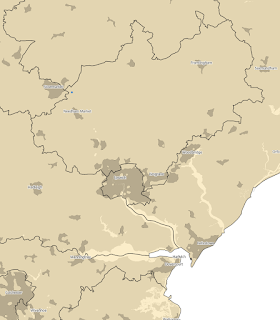 I currently live in Bury St Edmunds constituency, Conservative majority 24,988. The Liberal Democrats didn't contest it in 2019 - it was one of the seats ceded to the Greens for little effect (they came third with 15.7% of the vote). And the new proposals move Creeting St Peter into the revised Central Suffolk and North Ipswich constituency in the centre of the map, I've marked us with a green dot.
This represents a return to where we were prior to the last boundary changes but what is interesting is the significant redrafting from the previous proposals. Suffolk still moves from seven to seven and a half constituencies, the difference now is that, instead of sharing a constituency with Essex (Haverhill and Halstead), the cross-border constituency is with Norfolk.
Originally, a chunk of West Suffolk was to be parcelled off to the proposed Haverhill and Halstead seat, with Bury St Edmunds constituency shuffled westwards. The gap would be filled by splitting Central Suffolk and North Ipswich in two, north-south and expanding westwards, forming a North Suffolk seat and an Ipswich North and Stowmarket seat, whilst Waveney shrank to Lowestoft, and Ipswich, South Suffolk and Suffolk Coastal remained relatively unchanged. Creeting St Peter was going to be in the Ipswich North and Stowmarket seat.
The new proposals retain West Suffolk - possibly good news for Matt Hancock if his future plans include being an MP - and instead create a new Waveney Valley seat from parts of Bury St Edmunds, Central Suffolk and North Ipswich, Waveney and South Norfolk. It’s a pretty huge seat, stretching from Stowupland in the south-west to the western edge of Beccles to the east and as far north as the Tivetshalls in Norfolk. Bungay and Diss are probably the largest centres of population, but it’s going to be a pretty challenging task for anyone trying to take the seat from the Conservatives given the difficulty in forming a campaign team that can effectively reach the dozens of small parishes strewn across the area.
Bury St Edmunds and West Suffolk are both squeezed further westwards, whilst Lowestoft remains as originally proposed, losing Bungay and the Elmhams to Waveney Valley. Again, South Suffolk and Suffolk Coastal remain basically untouched, whilst Ipswich sees no changes.
Luckily, this requires very little disruption for Liberal Democrats in Suffolk, as we’re organised on local government boundaries. However, in Norfolk, they’re organised on constituency boundaries, which is going to make for some interesting discussions over Waveney Valley between Mid Suffolk (split between three constituencies, East Suffolk (likewise) and South Norfolk (now torn asunder).
But perhaps we ought to get the district elections out of the way before we worry about that…
Posted by Mark Valladares at 12:08 pm