It was a relatively gentle start, which was welcome after I’d arrived in Zurich just in time to catch the last shuttle to my hotel the previous evening. And it’s funny, isn’t it, how after a period travelling anywhere new, your confidence over what, prior to the pandemic, had been a relatively straightforward journey, is slightly, if not shaken, then not quite what it had been. Arriving at an airport after 10.30 in the evening felt a bit “edge of the seat”, even if I would have thought nothing of it a few years ago.

But everything had worked, and the adventure was underway. And, if you’re going to cautiously return to leisure travel, Switzerland is a good place to start. Things tend to run reliably on time, and drama is limited to whether or not there will be chocolate. And so, a journey from Rümlang to Vaduz via Zürich and Buchs (the St Gallen one rather than any other version) ran like clockwork, with the final connecting bus arriving spot on noon for the ride into a new country.

Yes, I’d never been to Liechtenstein before, which comes almost as much of a surprise to me as it does to anyone else. But the mountains were snow-capped, and Vaduz seemed quiet and unhurried. My hotel was another new experience, a self check-in one - part of a small Swiss chain - but it all seemed to work and I found myself with time to explore. 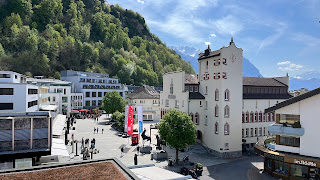 Admittedly, Vaduz doesn’t take long to explore - it takes about six minutes to walk from one end of the central core to the other - and the key things to do are all very close together. It’s wealthy in a low-key sort of a way, and whilst there are banks - that’s what Liechtenstein does - they seem solid and unobtrusive. The castle, home of the Royal Family, looms over the town, although it in turn is loomed over by the mountain that leaves Vaduz sandwiched between a vertiginous ridge and the Rhine, which represents the border with Switzerland. 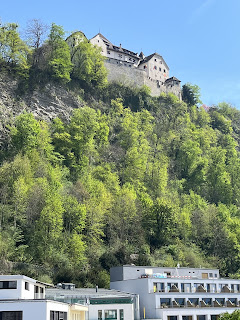 I bought a two day Liechtenstein Adventure Pass - no, not a contradiction in terms, as I’ll explain - for a very reasonable CHF29, which includes the entire national bus network and set off for the State Museum. Admission includes the Liechtenstein National Treasure next door but one and, with my entrance ticket (free with my Adventure Pass), I was given a coin to admit me to the National Treasure, which puzzled me somewhat.

It turned out that the National Treasure was self check-in too, as you placed the coin in a slot machine at the entrance which triggered the door to get inside, thus saving on the cost of a member of staff. And the National Treasure is a bit quirky, with everything from a Fabergé egg to one hand painted by one of the Princesses. But it’s quite impressive, all things considered. And the State Museum isn’t bad either, offering a potted history of what is a very small country. For example, I learned that, whilst Liechtenstein became a free nation in 1719, its rulers only took up permanent residence in 1938, after Anschluss. And, given what it is known for now, it was considered a bit rural and poverty-stricken until fairly recently. 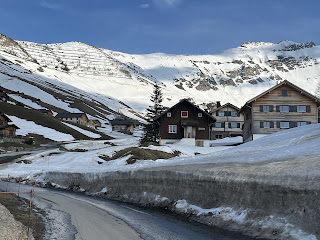 Next up was a bus ride to Malbun, Liechtenstein’s ski resort, via a stop in Triesenberg. The latter was reached via a series of switchbacks - uphill in Liechtenstein is really steep - and I found a rather sleepy little village, filled with houses with sensational views and possibly even more sensational sunsets. Malbun, on the other hand, was cold and snowy still, although ski season had clearly recently ended.

I headed back to the relative warmth of Vaduz, before heading to Schaan, Liechtenstein’s transport hub, for a gentle stroll. For, not only does Schaan have a bus station, but also one of the country’s very few railway stations, immaculately kept and in an unusual shade of pink. There aren’t many trains, but neither the Swiss mainline station at Buchs, nor the Austrian mainline station at Feldkirch, are very far away.

I needed dinner though, so back to Vaduz for food and an early night. And now that I was paying attention, I realised what was puzzling me about the announcements. Vaduz is pronounced with an extra ‘t’ before  the ‘z’, which I’d not appreciated. Now, I live in Suffolk, where we like to include letters that aren’t pronounced, so being somewhere where letters are pronounced but not written was a twist. I wonder what else I’ve been missing all these years…

Posted by Mark Valladares at 1:39 pm