Creeting St Peter: "What do you mean, there are elections tomorrow?" 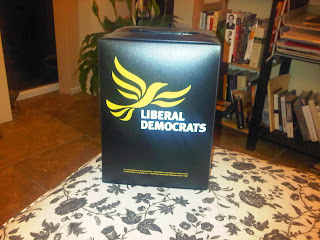 It would be fair to say that, as election cycles go, it's been pretty quiet in my rural idyll. In terms of the County Council election, without a Liberal Democrat of my own to vote for, my choice comes down to Labour, Conservative or Green.
So, what have they done to attempt to lure me into voting for them?
Labour did put out a leaflet, one which included a pen picture of each of the candidates across the entirety of Mid Suffolk. Given that they don't hold any County divisions in Mid Suffolk (or any District wards, for that matter), they're little more than a means of splitting the anti-Conservative vote and, given that they're less likely to win any particular division than the Liberal Democrats or Greens, there's a sense that putting an X in the Labour box is little more than helping the Conservatives to get back in.
The Conservatives have failed to contact me at all, not a leaflet, a telephone call or a canvasser to be seen. This is a Conservative-held division, needing a near 10% swing for the Greens to take it, and they appear not to be at all bothered to defend it. And yes, I know, Creeting St Peter represents less than 2% of the division, but still...
The Greens have put out three leaflets of increasing sophistication, have found their way into my Facebook timeline, and have a candidate with a proven record in the Parish.
I've not seen a poster or a stakeboard in the village. I'd put a Liberal Democrat diamond up, but we don't have anywhere to put it where anyone would see it, due to the vagaries of our demesne.
Turning to the Police and Crime Commissioner election, I am pretty confident that the only candidate to put a leaflet through doors in the Parish is James Sandbach, conveniently the Liberal Democrat candidate. This could be because I delivered them myself, and it was in fairness a pretty good effort.
The Conservatives might have delivered a leaflet but for the fact that they had to withdraw theirs after it became apparent that it claimed to have increased the number of police officers by more than there actually are in total. Tim Passmore is very sorry - possibly that he got caught.
And so, that made my postal votes very straightforward...
Posted by Mark Valladares at 11:22 pm