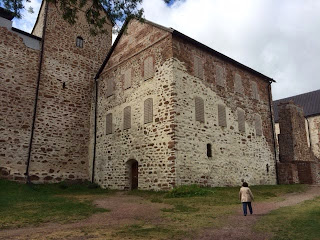 ... albeit unwillingly. This is Kastelholm Castle, now a quiet corner of Åland, and the only medieval castle on the islands, founded in the 1380s, and one of the many castles where Erik, his morganatic wife and their two children were imprisoned after he was deposed as King of Sweden by his brother, John III, in 1571.

It is a very peaceful spot, something that its inhabitants in its days as an active castle would have found hard to imagine, and not necessarily the easiest place to get to by public transport.

However, Ros and I had decided that it was worth it and, after a pleasant walk around Mariehamn, we caught an early afternoon bus towards Prästö. Åland is a surprisingly pretty place, and our bus glided through small communities and forests before reaching Kastelholm, where, along with a pair of German tourists, we were deposited and then abandoned.

Åland is like that, and even coming from somewhere as rural as Creeting St Peter, the silence is a mite unnerving. But we could see the castle, and as we crested a rise, the open air museum and a new, and apparently rather swish, restaurant called Smakbyn appeared. Time for lunch, we thought.

It was a good choice, as Ros had the pea soup (warning, it's not vegetarian!) whilst I had the salmon - both were excellent - followed by the Åland pancakes with plum sauce - also very good. But we had a castle to visit.

It would be fair to say, now that summer had apparently left Åland, that being a tourist here makes you something of a comparative rarity. The winter timetable for the local buses started a week ago, things start to close for the season - the open air museum will close its doors for the year in mid-September - and whilst our hotel is busy, it isn't exactly full. And so, the discovery that there were half a dozen of us in the castle was not quite as much of a surprise as it might have been. It did mean that we could gently potter about, enjoying the views and wondering about witch burning - they did that here too.

Next, we had a look around the open air museum, with its post mills and red-painted buildings whilst the sun put in an unexpected but welcome appearance.

Sightseeing done, we headed back to the bus stop, expecting a lengthy wait for what we thought was an hourly bus service. The unexpected sight of a bus somewhat earlier than promised by the timetable came as yet another pleasant surprise, as we returned to Mariehamn via a rather more direct route and were back in time to do a little shopping.

Tonight, we're eating out again, at one of Mariehamn's best restaurants. This might not ordinarily be saying much, but we have eaten remarkably well so far, and the reviews are good...
Posted by Mark Valladares at 4:03 pm