Needham Market - an unlikely home for a conspiracy theorist? 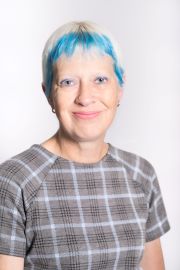 There was, I admit, more than a little disappointment when the Conservatives gained Bosmere from the Liberal Democrats in 2017. After all, it had been Ros’s seat from 1993 to 2005, and whilst it had been defended successfully in 2013 - as much thanks to a UKIP intervention as anything else - the margins had become ever more dependent on piling up votes in Needham Market and hoping that the losses in Barking and Somersham and Ringshall weren’t too much against us.

But, with a new candidate, selected rather too late in the day to establish a track record outside the town, the seat was narrowly lost to Anne Whybrow, the former Conservative county councillor for Stowmarket South who herself had lost in 2013 by one vote to a UKIP candidate now serving a fourteen year sentence for murdering his wife.

It turned out that she wasn’t well, and perhaps hadn’t been expected to win, and her sad death just fifteen months later led to a by-election which... we didn’t win... by 19 votes.

Her replacement, Kay Oakes, had political form in Needham Market, and thus was probably a good choice. It turns out though, that she might not have necessarily been that good a choice.

This week, she was exposed on social media for retweeting comments supportive of the Washington rioters and, as it turns out, being an enthusiastic supporter of Donald Trump. Indeed, she retweeted conspiracy theories suggesting that the invasion of the Capitol was an antifa act.

What I found most intriguing, however, was her defence;

I would like to apologise for ‘liking’ a small number of posts on Twitter which suggested, inaccurately, that those other than the obvious perpetrators were behind the events at the US Congress.

It can sometimes be too easy to be taken in by conspiracy theories on social media and my judgement on this occasion was wrong.

I hope that all those who know me realise how hard I work on behalf of our community and how dear to me our part of Suffolk is.

I suppose that we are being asked to accept that despite her apparent gullibility, and the ease with which she can be persuaded to endorse and promote conspiracy theories, she can be trusted to take decisions on education and social care on the basis of fact rather than fiction.

And if you’re willing to accept that, I’ve got a nice bridge in Brooklyn that you might be interested in purchasing...

Posted by Mark Valladares at 11:33 am

With regard to your penultimate paragraph, I know that I have become cynical over the years, but it seems to me that much of local politics is based on the premise that the candidate may not know anything of any use but their family has lived in the area since 1300, so obviously you have to vote for them.