Sometimes, your life changed when you least expected it... 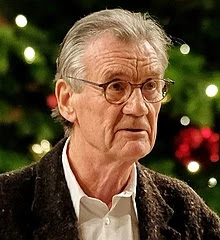 We've been watching the Michael Palin retrospective on the BBC, in which our hero looks back at his travels, playing a thoroughly decent fellow, meeting interesting people, treating them kindly and visiting interesting places in unexpected ways. It's easy to forget, looking back, just how radical this was. And we've taken the opportunity to rewatch the original series, courtesy of BBC iPlayer.

Watching him arrive in Tallinn, under Soviet control as it was then, in the summer of 1991, brought back memories.

My travel horizons were, once upon a time, really quite limited. I'd gone backwards and forwards to Mumbai a bit, to visit family, but that wasn't as much of an adventure as it sounds, given how familiar it was. And it wasn't a lack of adventure - travel was more complex and expensive then, and far less spontaneous. I'd been on a few school trips to Europe, but done very little independent travel.

It was politics that triggered my travels, when I was sent as a Young Liberal Democrat delegate to a seminar on youth culture in, of all places, Aarhus, Denmark. One thing led to another and I discovered that meeting other Europeans was not only interesting, but accessible, especially for a bureaucrat with a decent job and what seemed like a lot of disposable income, thanks to the hospitality of my parents. Within the year, I'd managed to just about persuade a bare majority of my colleagues to elect me as International Officer and an odyssey began.

And what a time it was. I only served for fourteen months or so, from November 1989 to December 1990, but it was a time when all of the old certainties suddenly disappeared in a puff of smoke. Communist governments were overthrown across Central and Eastern Europe and it looked as though liberal democracy had triumphed over totalitarianism. They were heady days...

And the travel began, first with my first wife to the United States and beyond, and then, when that ended, to the places you only normally dream of, Latin America, the South Pacific, East Asia. Then, with Ros to the Arctic and the Atacama, Patagonia and the Caribbean...

The thing about travel is that, apart from broadening the mind, which it does if you're doing it properly, it's quite addictive. And, it has gotten easier as time goes by. The internet, and the explosion of guidebooks as opposed to tourism brochures, allows you to research independently, and smartphones and wifi allow you to deal with situations as they arise.

Lost in Los Angeles? Bring up Apple Maps on your iPhone. Need a night in a hotel because your connection has been missed or cancelled? Use a hotel chain app to find one and book it immediately. Arranging your visa online, booking a flight for tomorrow, ordering flowers for a host, all can be done by pressing a few buttons without reliance on other people, contact centres or post. Bus maps in New Hampshire, baseball tickets in Caracas, restaurant reservations in Riga, or Anchorage, hotels in Santiago or Chennai, all at your fingertips.

On reflection, it's pretty amazing. My bank card has allowed me to access cash from ATMs everywhere from Port Vila, Vanuatu to Havana, Cuba, from Port Louis, Mauritius to Puerto Natales, Chile. No bank queues or travellers cheques, no worrying about exchange rates or controls, money on demand, twenty-four hours a day.

Luckily, it's never become workaday. It's allowed me to see things that the younger me could have barely imagined, have experiences that will keep me warm in my old age, meet people who entertained, educated and informed. And there's still so many places I want to see... once this wretched pandemic is over.

Posted by Mark Valladares at 10:46 pm

Email ThisBlogThis!Share to TwitterShare to FacebookShare to Pinterest
Labels: travel