Quiet Lanes - an opportunity to be seized, or a risk to be avoided? 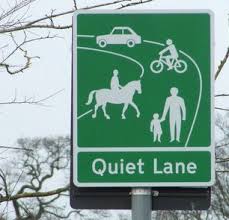 Twenty years ago, a young Baroness moved an amendment to the Transport Bill then under discussion which was intended to make it easier to establish Home Zones and Quiet Lanes. At the time, the Minister, Lord Whitty, was not entirely convinced but wanted to take it away for more thought. The outcome was Section 268, Transport Act 2000, and the young Baroness, who had been in the Lords for less than three months, was Ros.

The significance of that certainly didn’t hit me at the time - not only did I not know Ros, but the relevance of the legislation to an urban bureaucrat would not have been obvious.

However, this week, the idea of Quiet Lanes has been raised, as Suffolk County Council have launched a £235,000 tranche from its Suffolk 2020 Fund – a one-off pot set up for projects this year – to encourage town and parish councils to apply for potential quiet lanes in their area. Now, living in a village which has suffered from speeding for years - we have no pavements and the road through the core village is single track - the headline rather caught my eye as a potential opportunity.

There is a problem, however, in that there are only two routes into the village, both of them lengthy stretches of single track road. A 2006 circular, issued by the Department of Transport, suggests that the Quiet Lanes option is suitable for roads with less than 1,000 traffic movements per day.

You’d think that a village with a population of 200 would struggle to reach that, yet if you add in all of the vehicles that visit the village from outside, delivering things, carrying out tasks, visiting residents, the amount of traffic mounts up. We’re also an increasingly useful cut through allowing traffic to bypass Stowmarket.

So, there is a question of simple eligibility. However, there’s also a question of desirability. Do we, as a village, want to limit speeds on roads that don’t see so much non-vehicular traffic? What actual benefits might we see in return for any investment?

The obvious solution is to consult with my colleagues, and with village residents as far as is possible. Luckily, we’ve got a village newsletter going out soon...

Posted by Mark Valladares at 9:16 pm