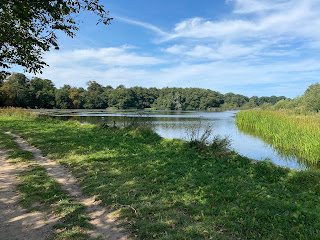 It’s coming on for five years now since I started what seemed like a vaguely heroic quest - for me at least - of trying to walk 10,000 steps every day. I started in midwinter, on the basis that, if I could do it then, I could probably keep it up. And, for seven weeks, I did just fine. On day 50, I contracted food poisoning in an all-inclusive resort in Cuba. I may be one of the very few people to have left an all-inclusive resort weighing rather less than I did when I went in...
I lost three days but, by day 4, I was able to get back on track. That was 18 February 2016, and I haven’t missed a day since.
That sounds rather impressive as I think about it. Despite rain, snow, hurricane force winds, I’ve doggedly got my 10,000 steps, walking around airport terminals, making deck circuits with a view of the polar pack ice, trudging through a blizzard across the New Hampshire/Maine border. But mostly, those steps have been done within a short distance of home.
I’m lucky in that regard. Ros is very encouraging, sometimes arranging things (and me) to make getting those steps easier, but generally allowing me to disappear for half an hour here, or an hour there to get them done - it takes about an hour and forty minutes of continuous walking to get to 10,000 steps, especially as I tend to the view that running is for people being chased by tigers (there are very few tigers in mid-Suffolk).
And, as you might expect, there are benefits too. I’m nearly twenty kilos (forty-two pounds or three stones) lighter than I was then, slightly more limber than before, and rather less vulnerable to the Valladares curse - type 2 diabetes. I’ve also expanded my wardrobe towards something more dapper, which is nice. And, and this is quite important given one of my great loves, fitting into aircraft seats is a less traumatic experience.
One unexpected plus is my increased exposure to village life. People have a habit of stopping for conversation, which gives me fresh insight into how my village works, and what troubles it. As Chair of the Parish Council, that can be incredibly useful, as it gives me ideas for things that we might do to help, or to improve the village. They may be small things, but they matter, and that should be what community activism is about.
So, onwards into my sixth winter. I’m better equipped, with the rain gear I picked up in Chile, sensible walking shoes from Clarks, with the back-up of proper hiking boots from Timberland, and a flat cap made of Harris Tweed to keep the rain off my eyebrows. I’m also in a groove - a day feels incomplete until my FitBit wristband buzzes to let me know that I’ve completed another 10,000 steps.
Wish me luck...
Posted by Mark Valladares at 9:33 am

I won't wish you luck, because it seems to me you don't need it, but I will say well done!