It’s been twelve years, but a President-elect’s promise has been kept... 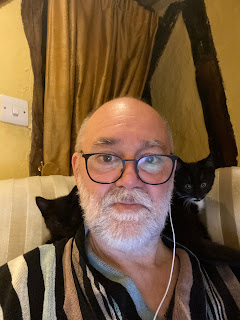 Twelve years ago, Ros was declared the new President of the Liberal Democrats in what was a bit of a landslide - 72% in a three-cornered contest can, I think, be fairly reasonably described as such. In her acceptance speech, she promised me a kitten, the cause of some amusement.
We did still have cats at this point, however, and the time never really came right to get more of them. You know how it is, life is busy, we travel a lot, and leaving cats alone for much of the day seems a bit unfair. But the pandemic changed that - I now work from home, and am likely to do so to some extent even after the pandemic recedes. And that means that the “excuse” for not having cats has also receded somewhat.
And so, kittens. Two of them, to be precise, obtained from a cat rescue centre in mid-Norfolk which Ros had spotted in the Eastern Daily Press. They were, coincidentally, in need of homes for a number of kittens and it was a case of right place, right time. We’d been up to Mattishall a few weeks ago, been approved as appropriate cat owners and were asked to wait whilst the kittens were weaned, vaccinated and prepared for their new life.
Accordingly, last Sunday, we drove back up the A140 in the pouring rain, equipped with a newly purchased cat carrier, to collect the little monsters adorable creatures, and then brought them home, mewling most of the way.
They settled well, exploring the living room, where we had chosen to confine them on their first day so that they might slowly acclimatise themselves to their new home, and using the litter tray that we had bought for them - they came litter trained, thankfully. And, reassuringly, they were very “people friendly” from the outset, sitting on us, purring, and all the behaviours you might hope for.
Naming them was a bit of a challenge, especially as we weren’t sure whether they were male or female when we picked them - they’re both male as it turned out. But, after some discussion, we settled upon something topical, calling them Penn and George, after two of the key states in the recent American elections.
Penn is almost entirely black, with a small wisp of white fur across his chest, whilst George is black and white, albeit mostly black. We’ve expanded their area of operation to the kitchen and conservatory, and eventually, once they’ve been neutered, they’ll be allowed outside - the lucky devils get to miss the worst of an English winter.
They’ve got toys, an occasional box to play with, a scratching post/tower to lie on, destroy and otherwise torture, and seem to spend much of their time asleep or lying on one or other of us. So far, so good...
There is something of an irony, in that whilst the kittens are twelve years late, Ros is still President... albeit of the Association of Liberal Democrat Councillors rather than the Liberal Democrats, but a President is a President for all that.
And now if you’ll excuse me, I’ve got a kitten on my shoulder which needs my utmost attention...
Posted by Mark Valladares at 10:45 am

Email ThisBlogThis!Share to TwitterShare to FacebookShare to Pinterest
Labels: kittens