A Suffolk Circle via the Stour Valley 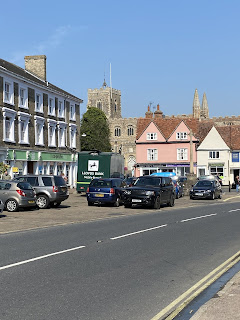 I had set aside today for some internal Liberal Democrat stuff but, for reasons beyond my control, it was cancelled. What to do instead on what turned out to be such a lovely day?

Well, another bus ride seemed like a good idea, as Ros was speaking in the Agriculture Bill debate and really didn’t need my presence. And, having dropped me off at Needham Market, it was time to pump some more money into the public transport sector.

I hadn’t actually ridden on a train since the original lockdown, so the short journey to Ipswich seemed like a gentle introduction, and Greater Anglia’s shiny new trains are still pretty quiet, meaning a stress-free journey. People are wearing masks for the most part, which is reassuring.

My plan was a mite high risk, with some tight connections for buses that run every two hours, but as I’m an optimist, what was the worst that could happen?

Beestons run one key bus service in Suffolk, route 91, which links Ipswich with Sudbury, via Hadleigh. It’s a pretty journey, heading west through the undulating countryside that is south Suffolk and, at the end of it, is Sudbury, a town that I quite like. Yes, the planners haven’t done it any great favours, as is often the case in Suffolk, but the core is nice and the setting equally so. You could argue that its lousy connections to London have protected it - there’s no direct train service, and the connection at Marks Tey is unreliable at best.

I had time for a gentle stroll around the town centre before possibly Suffolk’s best bus ride, the Chambers operates 236 route to Clare, via Glemsford. The upper Stour Valley is glorious at this time of year, still green and rolling, with small villages hidden away and always a new vista to enjoy. Sadly, I had a very short connection at Clare, which rewards a walk, with the castle and the country park which includes the old railway station, for I needed to get to Haverhill.

It might be harsh to suggest that Haverhill is seldom a place where people feel a need to be, unless they live there. That’s probably because it’s a town surrounded by 1950s and 1960s housing, built for an outflow of Londoners at that time. Lovely, it isn’t, although compared to some recent social housing builds, it at least has some community spirit and has aged well enough. Mind you, sunshine tends to make most things look better...

I had another very short connection at Haverhill, to a Stephensons of Essex operated route 18 bus to Saffron Walden - a very different kettle of fish. Saffron Walden is genteel, middle-class, with a town centre Waitrose and all the things that go with that. The railway station is at Audley End, so that it doesn’t get too crowded. You’d almost forget that you’re in Essex. The bus runs through Helions Bumpstead, one of those villages whose name must be made up, mustn’t it?

A snatched lunch in Saffron Walden allowed me to catch the hourly Stagecoach bus to Cambridge, following the railway line through Great Chesterton, Whittlesford and Shelford, through a series of villages that probably benefit from their proximity to Cambridge.

It was time to head for home now, meaning a rather longer train ride on a rather busier train. I did have a four-seat section to myself as far as Bury St Edmunds, where college had let out. The teenagers sitting opposite me needed a reminder to cover their noses with their masks, but did at least have sufficient thoughtfulness to adjust them when asked.

So, all in all, another nice day out, although if the passenger numbers are anything to go by, it could be “ride the bus whilst you still can”, as I increasingly wonder how they can remain economically viable.

Posted by Mark Valladares at 7:19 pm