Whilst Borjomi is famous for its mineral water, Tbilisi is famous for its thermal baths, where you soak in the warm waters supposedly renown for their health giving qualities. Various famous people came to Tbilisi, bathed and were seriously impressed. These days, it’s rather more of a tourist thing, but it looked like fun, so I had booked a private room and a peeling before arriving in Georgia. 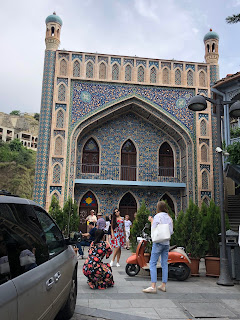 I had picked one of the more highly recommended, recently refurnished baths, and arrived to find something rather spectacular, at least on the outside. And, somewhat to my relief, it was just as nice inside.

For about £65, you get two hours in a private room, large enough to hold four, if you’ve brought friends along. The room, or at least my one, came with a warm thermal bath, a cool thermal bath and a scorchingly hot Finnish sauna, which you can alternate as you feel the desire. For not much extra, a rather stocky Georgian will come to the room and give you what is called a peeling, where he scrubs you with a mildly scouring hand mitt, soaps you and then rinses you off. Anyone who has been to a Turkish bath will understand what I’m talking about. You lose quite a lot of dead skin, and come out of it rather smoother than you went in.

They’ll also bring you food and drink, including alcohol, and the room comes with a menu. The room is charged by the hour, rather than per person, making it potentially very reasonable in cost terms.

And it was very good. I came in slightly weary and a bit frazzled, and left rather more relaxed.

The rest of the day was spent walking around the city, despite the heat. Tbilisi is a very walkable city, and even if your accommodation is less than central, the Metro system can bring you to the old town quickly and efficiently. I rather liked the place, and if time permits, I’ll bring Ros, as I think she’d like it too.
Posted by Mark Valladares at 12:09 pm